This is the foundation chart of the People’s Republic of China, proclaimed by the infamous genocidal and pedophile Mao Zedong on October 1, 1949, at 3:01 p.m. in Beijing. The photo that accompanies this astral figure shows that precise historical moment, when the tyrant inaugurated his dictatorship. The ascendant of the map falls at 01°33′ Aquarius, with the Moon being peregrine, angular and waxing in conjunction with the cusp from 03°03′. It is, without a doubt, the radix of a deeply collectivist and gregarious nation, where individuality weighs very little in relation to the importance of general well-being.

Both the minor conjunction of the two misfortunes, namely Mars and Saturn, which occurred on March 31, and the great conjunction of the chronocrators Jupiter and Saturn, will be perfected next December 21 at the zero degrees of Aquarius, that is practically at the ascendant of China and within orb with the Moon. The conjunction of both malefics closed less than one degree from the ascendant in question. The great conjunction of the chronocrators, which includes a powerful triplicity change, will make it just over a degree from the first cusp of the Asian giant. China is already mobilizing its game pieces to take advantage of the pandemic that nowadays has the world on its knees.

The astrological events reviewed indicate a shift in the geopolitical center of gravity from the West to the East, and more specifically from the United States to China, a country that will triumph in the fight for world domination for the next decades. This will begin the historic Asian Century. Countries such as Japan and South Korea will also play a prominent role within this new order, although with a much more modest scope. It will be China who directs the destinies of the world, controlling the economy, as it has done so far, but above all international politics. But the Chinese way of doing things is far from being compatible with our most fundamental concepts of freedom and individuality.

The cyclopean Eurasian Land Bridge and its rail transport lines are a concrete manifestation that a new silk road will dominate commerce and culture in the coming decades. The investment has been huge. Thanks to it the Chinese Communist Party, together with its satellite companies, will build the largest commercial infrastructure project in all of human history. There will be 68 countries involved and more than 65% of the population under the economic and diplomatic rule of China, including almost all of Europe, which will operate as the western link of the route and key strategic pole under the tentacles of this Asian Leviathan.

Meanwhile, the United States will lose power and influence, falling second or third in the ranking of geopolitical relevance. This is thanks to the constant flow of investment from Wall Street to Beijing and Shanghai, since the greed and betrayal of the American bankers do not recognize limits of prudence or loyalty. China’s technological dominance will be one of the cornerstones of its hegemony in the next era of artificial intelligence, robotic automation, and digital surveillance over population. We are moving towards an era of authoritarian totalitarianism and population control, with the favor of that strange Chinese hybrid between political communism and economic capitalism, richly financed by speculators in the Manhattan financial district.

Ahead we have the triplicity change of the great conjunctions. It will be two centuries of mutation from earth to air. Jupiter represents the rich, abundance and liberties. Saturn signifies the poor, the precariousness and restrictions. It is the latter who is favored in his diurnal domicile, while Jupiter is harmed and dominated by Saturn in the sign of his lordship. With China ahead, we shall enter an Orwellian world, where politics consists of scientific administration of scarcity and the strict control of the masses through the digital surveillance network. Any Tibetan, Uighur, or Mongolian could testify broadly to what is coming for the world, but their voices have been silenced for decades in the concentration camps in northwest China.

The delusional hippie dream of an aquarian universal brotherhood in consciousness and freedom is broken into a thousand pieces. It is better to remove the diving helmet of our own thoughts and look out the window of reality. And I mean literally go out and look. Around midnight it is possible to see Jupiter and Saturn closer every day on the eastern quadrant of the sky. The future is almost here … It is in the battle against the dark ages, oh Kalki, where your warriors will be consecrated to the kiss of immortality! 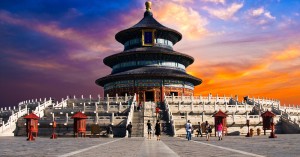